Brandon was born on May 21, 1994 to Dedra Brown, he was six weeks early, weighing only four pounds and four ounces. His mother later married Patrick A. Harvin, who adopted and raised Brandon as his very own son. He departed this life and entered eternal rest on Monday, May 9, 2016 after an ATV accident on Sunday afternoon. 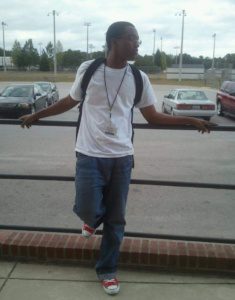 Brandon was educated in several private Christian Schools to include Tender Years of Progressive Church of Hopkins, Bible Way Church of Atlas Road, St. Andrews Christian Academy, V.V. Reid Elementary School, and Ben Lippen School where he joined the Marching Band. He entered public school at eighth grade at Hopkins Middle School quickly became known as “Chip Ahoy” because of the beauty mark on his nose. He went on to graduate in 2012 from Lower Richland High School where he was the drum line captain on the Diamond Brigadier Marching Band, an award-winning culinary arts student, a varsity and junior varsity baseball player, and voted “Best Smile” by his senior class.  He was currently a student a Midlands Technical College majoring in business management.

Brandon committed his life to Christ at a very young age and was baptized by his father at Haskell Heights First Baptist Church of Columbia and also sang on the youth choir. As his family began in ministry at Jerusalem Baptist Church of Hopkins, Brandon grew and developed as part of the Worship and Arts ministry as a musician, nursery and preschool Sunday School teacher, member of Audio/Visual ministry and youth ministry, as well as armor bearer to his father.

Brandon was employed by Wells Fargo as a phone banker and Jerusalem Baptist Church as a musician. He was also a Barber apprentice at Evolutionz Barber Shop. He was also employed for several years at Shepherd’s Corner Christian Bookstore. He had big dreams and plans that he would often share and tell you “just watch”.
Brandon had an enormous amount of love and compassion for every person he knew. His relationships with his family and friends were a vital part of his life. He would drop everything he was doing to help a friend in the time of need.  His smile and laugh were contagious. He took great pleasure in jokes, pranks, mockery, and calling people “big head”. He tried his best to shine his light every place he went.

He was preceded in death by his great-grandmother, Marie Brown and grandmother, Anne Harvin Rich.